F-150 Ecoboost 3.5l I was impressed (coming from a 6.0 diesel I immediately fell in love with the torque, horsepower – and well – the better turning radius). Most of the 30,000 miles on that 2012 F-150 came from either the dyno or the track. Pushing 660 HP and 720 ft-lbs of Torque on a built motor, hitting it with 150 shot of nitrous, meth and E85 mix was just part of the routine. Unfortunately I was never able to hit the track at that power level due to a leaky oil seal, so the current best time is still 12.177. Regardless, I became very familiar with that truck. 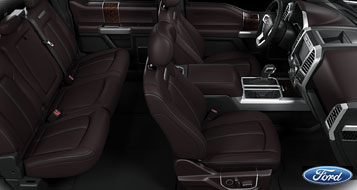 Back to the 2015 F-150 Ecoboost 3.5l, the first model I tested had the works. Platinum model F-150 Ecoboost with pretty much every option you could want. Just sitting in this truck is nice. Then came the stock test drive. I always like to get to know a truck on the stock platform to feel it out. I thought my 2012 F150 Ecoboost 3.5l was fun, but driving the 2015 Ecoboost takes it to another level.

Ford has once again raised the bar.

I’ve been very impressed with every Ecoboost I’ve driven – from F150’s to Mustangs to Fusions.

I had already read about the new features brought in with the 2015’s. One thing I like is the different driving mode options. Changing from normal mode to tow-haul or sport, you can really feel a change in throttle response and shifting. I am not a huge fan of how the gears are held out in sport mode, however, but the acceleration and throttle response is enough to look passed that flaw. The interior of the 2015 F150 feels like it should for a Platinum. Like a luxury truck with enough torque to scare your wife… for fun of course. 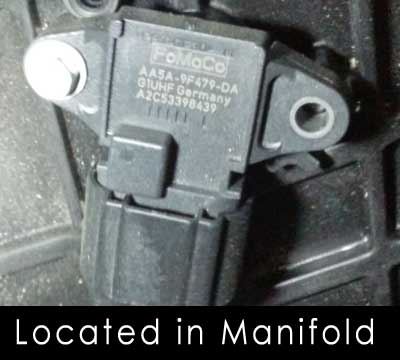 While strapping the truck down on the dyno, I 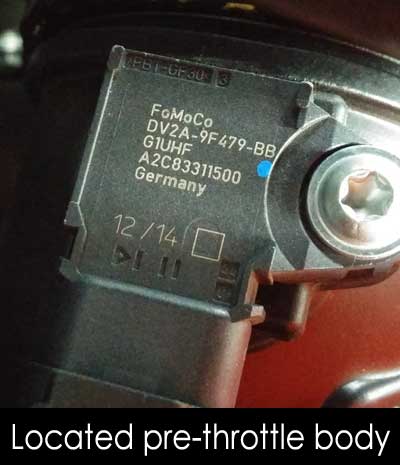 was surprised by a few gifts from Ford. On the 3.5L, there was a vacuum nipple that read boost – no cutting or modifications needed. Boost displays accurately on the dyno which makes our lives much easier. (Unfortunately, the 2.7l Ecoboost isn’t this nice. Looks like the same nipple but no boost reading.) Another cool thing about the 2015 is the intercooler access. Looking from the front and under the truck I would guess an intercooler swap is going to be a very quick and easy job. The rumors of a different map sensor than previous years are partly true. The 2015 Ecoboost uses manifold absolute pressure (MAP) sensor part number: AA5A-9F479-DA which is the same manifold absolute pressure sensor used in the 2011-2014 F150 Ecoboost 3.5. The TIP sensors however are different. 2015 Ecoboost 3.5 part number is DV2A-9F479-BB and the 2011-2014 F150 Ecoboost 3.5 TIP sensor is AA5A-9F479-AB. How much this actually matters is the question. While there have been benefits to changing the MAP sensor on big-powered Ecoboost vehicles, the TIP sensor appears to have the range needed from the factory.

The factory tune dyno results came to a quick halt due to the speed limiter. The truck was being tested in 4th gear and with the stock speed limit it wouldn't make a pull past 4000 rpm. We wanted to have a true apples to apples comparison, so we decided to install a custom tune with only the stock speed limiter removed. After this was done, the truck laid down some really respectable torque.

Stock tune with no speed limiter made 298 HP and 367 ft-lbs of Torque.

The horsepower was falling off pretty hard near the top but at this point this is known to be the norm on ecoboost vehicles from the factory. Pretty much across the board the Ecoboost trucks and cars are torque monsters down low. The first step on diving into the calibration and developing our MPT Custom tunes for the 2015 Ecoboost F150 3.5 is to review the data logs of the stock runs. First thing that popped out was again the intake temps. Granted we are in the worst possible conditions for heat with our dyno room being in Central Florida. I still don't like to see intake temps increase to this degree. At the beginning of our 4th gear stock pull with no limits the intake temps were already 143. This is cranking hot, then by the end of the dyno pull they were up to 165!. The actual dyno pull and power weren't half bad. We did hit some over-temp conditions which caused extra fuel to be dumped in at 5000 rpm. This is evident on the dyno graph as well. Power falls off in key with the enrichment. 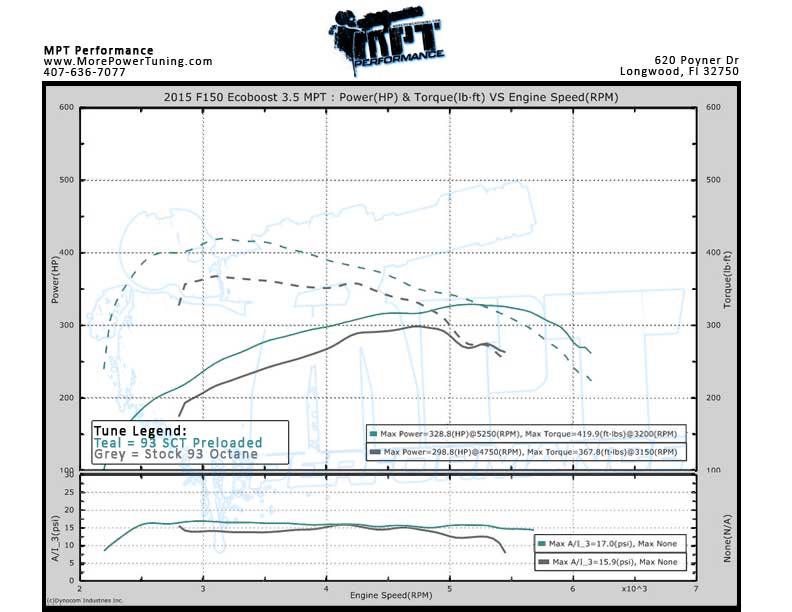 Next on the agenda was to analyze the pre-loaded SCT tunes that come on the SCT programmer for the 2015 Ecoboost F150. Intake temps were slightly favorable compared to the stock run but still saw an increase of 20 degrees or so during the pull. The results on this test were a little surprising.

Comparing the 4th gear pulls preloaded sct 93 tune to the stock 4th gear pull showed a gain of 30 horsepower and 52 ft-lbs of torque.

Still a gain and any gain is respectable, I've just become jaded with the larger figures over stock on the Ecoboost platform. If I remove the past results from memory gaining 30 hp and 52 ft-lbs of torque is still a good deal. After all this is a tune only that installs in minutes and can be removed just as easily.

The approach to the 2015 platform was slightly different than the approach we took on the 2011-2014 Ecoboost F150s. One of the previous goals was to get the throttle body to stay open 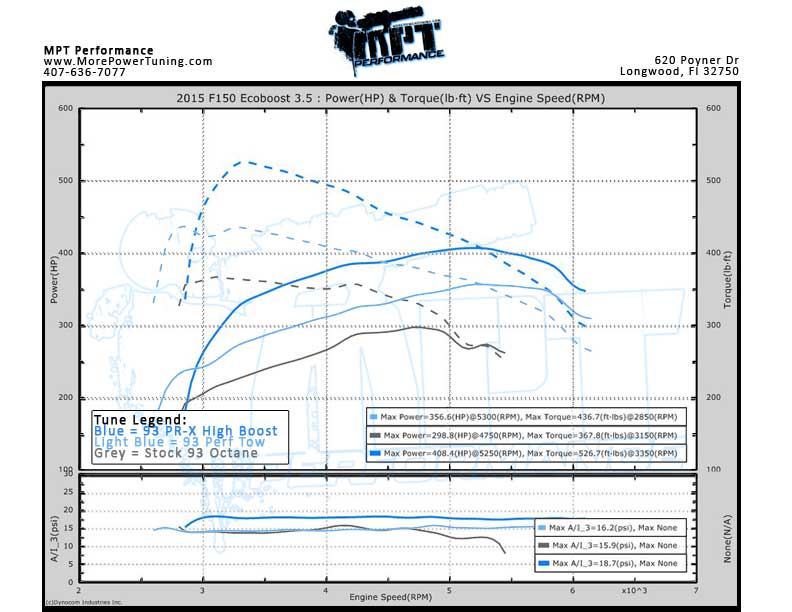 at all times that the pedal was to the floor. For the 2015 F150 Ecoboost 3.5 the changes we made allowed the throttle to stay open longer but also added an element to close when needed. This resulted in a very smooth linear torque curve. During the 4th gear dyno pull for example, the MPT custom tune closed the throttle at 3000 rpm but quickly opened back up and stayed open for the rest of the run. The stock and preloaded tune both had multiple changes points where the throttle closed. The results on the 93 PR-X tune were also surprising in a good way:

The power was great and the datalogs were as well. Next step was to decrease power and develop a Performance-Tow hybrid tune. The hard part was already done, so this ended up being pretty simple. After only a few revisions, we ended up at a comfortable 356 HP and 436 ft-lbs of Torque.

Our previous article on the 11-14 Ecoboost Tuning overview is still very relevant even on the 2015. Granted, there are quite a bit of differences between the two; but the thousands of hours of R&D and the dyno and track time on the 1st generation platform still really helped move things along for the 2015’s. The amount of changes that go into making these tunes can come as a surprise, typically one thinks of tuning as "increase this limit, raise that table," etc. We call this the "+3 method." Plus 3 all the things. We have a good friend in the Ecoboost industry that likes to use this method quite a bit. Jacking up every table even if it doesn't need to be jacked. This method can work, but it is not the safest or best way to go about things by any means. There are key tables and items that we actually end up decreasing from stock to help get the power gains to the wheels. Torque, Spark, Desired Boost, Wastegate are just a few of the key changes for the Ecoboost Platform. Besides those obvious changes we also spend a good amount of time off the dyno, driving the truck. Making the shift points and shift firmness match the performance of the truck. Now, we have an opinion of how the truck should shift and feel, but we also realize that there are a good number of people that really like the way the truck shifts from the factory. For this reason we also offer the tunes with a more stock like shift setup.

Temps unfortunately are still very much an issue on these trucks, so I could see them benefiting from the same set of mods as previous years. A better intercooler and thermostat should be on the short list of items to add to improve performance and provide consistent power. Meth injection will also be a key player in helping get intake temps down while also providing a boost in octane. One thing I am extremely happy to report is that we did not need to re-gap the spark plugs at all, even with the massive increase in power. The 2015 F-150 Ecoboost 3.5l did not need the spark plugs re-gapped! They were good to go straight off the lot. That’s such good news I had to say it twice. Looking at how the power falls off around 6000 rpm, there could be more work to do at WOT, but then we could also just be hitting a limit of airflow. Intake manifold and/or exhaust manifold could also be the cause of that power drop. Overall, I am very pleased with the results here and look forward to the future for the 2015 F-150 Ecoboost 3.5l trucks. 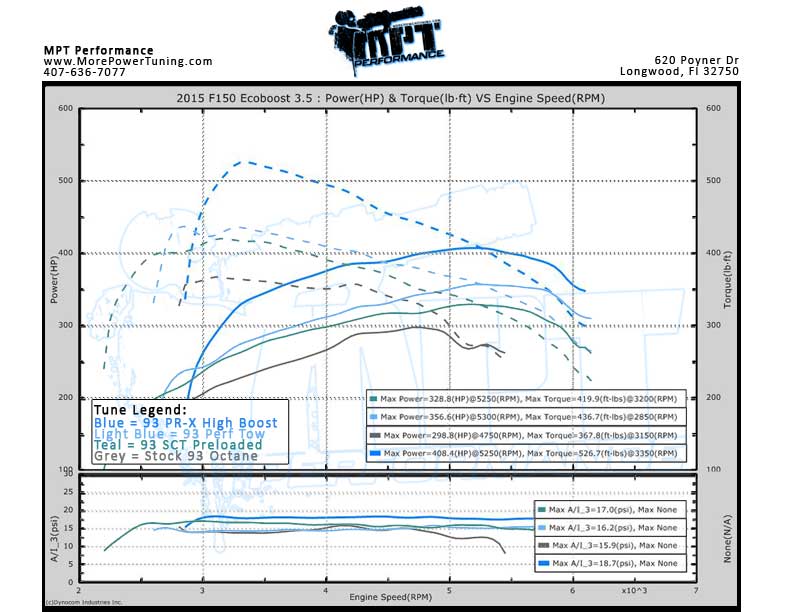