Posted by MPT on 8/18/2015 to News
Jay, and the crew over at JLT, recently sent us a new addition to our Fleeterbomb project. We received their highly anticipated JLT CAI for the 2011-2014 F150 5.0L. This cold air intake features a 110 mm integrated MAF housing and is made from Rotomolded ABS plastic. It also features a HUGE 4.5” x 6” S&B Filter, for plenty of flow.
JLT Performance has been a long time leader in the Cold Air Intake market, and this JLT F150 CAI follows suit with all of their previous offerings. The ABS plastic construction offers a few key benefits that we should note. Not only does it offer a smooth interior for optimum flow, sturdy construction, and rugged good looks. Most importantly, ABS plastic does not transfer heat, so your “cool air” actually stays cool on its way to the engine. This is a characteristic you can’t get from a metal intake, as metal absorbs under-hood heat and transfers that heat to the incoming air charge.
So, knowing we had an awesome JLT Cold Air Intake on our hands, we got to work on Fleeterbomb, our 2011 F150 5.0L XL “work truck” turned “race truck”. We laid down a few baseline dyno pulls, first, and our 150k mile test mule laid down a solid 301 hp and 332 ft-lbs of torque, on the stock Ford calibration with 93 octane in the tank. This is very respectable considering conditions were less than ideal, as it was a typical hot and humid summer day in Central Florida. We then loaded our proven MPT 93 Octane Performance Street Tune, for the 2011-2014 F150 5.0L, and laid down some more baseline numbers. In the same hot and humid conditions we were able to coax out a peak of 335 hp and 345 ft-lbs, through the completely stock exhaust with stock intake. Not a single modification on this truck other than the MPT custom tune.
Now that we had some solid baseline numbers to compare against, it was time to install the F150 JLT CAI. The installation couldn’t have been easier. With the supplied installation instructions from JLT Performance and a couple of basic hand tools; we had the Cold Air Intake installed in less than 15 mins (and that’s even with stopping for pictures and videos). The fitment was perfect, the JLT F150 CAI makes a great looking addition to any 2011-2014 F150 Coyote 5.0L engine bay. 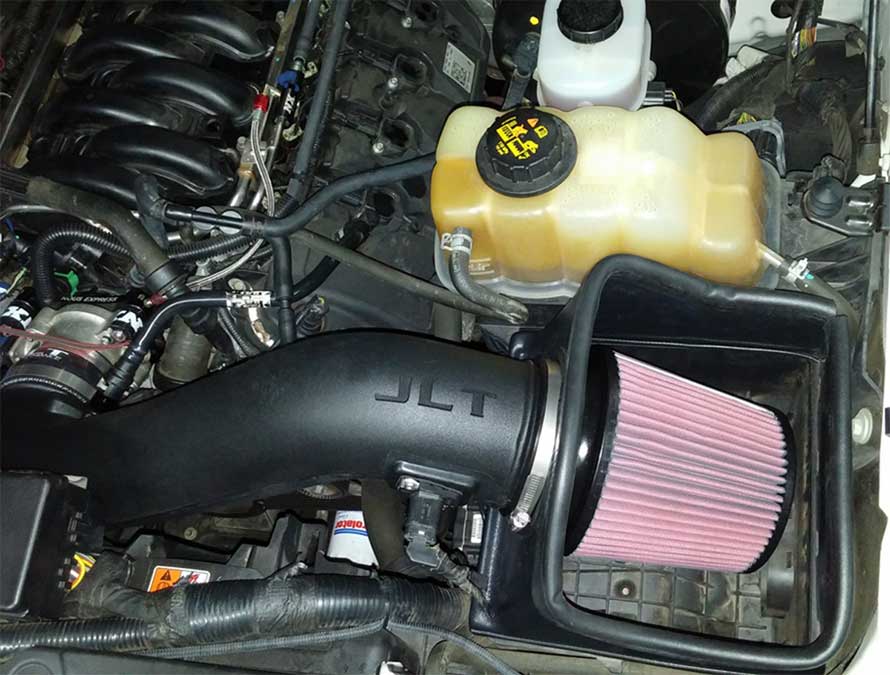 After the install, we moved on to dialing in the tune for the increased airflow that the JLT Performance Cold Air Intake provides. This is where the JLT F150 CAI separates itself. This intake unlike most others is not a "no tune required" intake. Since the JLT Performance Cold air Intake includes a MUCH larger (110 mm) MAF housing than stock, we had to account for this drastic increase in airflow to get fueling back on track. It’s important to note here that the JLT Performance Cold Air Intake for 2011-2014 F150 5.0L trucks REQUIRES a custom tune. Attempting to run this intake without a tune that is set-up properly for this Cold Air Intake can cause all sorts of problems. So, make sure to have your custom tune ready to go, before installing this Cold Air Intake.
Once we got everything dialed in, we were able to make some pulls with the new F150 JLT CAI. We immediately noticed a nice increase in throttle response, and an aggressive snarl from the intake when we got on the throttle. Dyno results confirmed our first impressions and we saw a peak of 344 hp and 355 ft-lbs of torque. We saw a consistent gain of 10 hp and 10 ft-lbs through the entire curve over our 93 octane tune, and a whopping 45 hp and over 30 ft-lbs of torque over stock, with the JLT Performance Cold Air Intake and our MPT Performance 93 Octane Performance Tune.
The take away? JLT Performance has delivered another great product. The 2011-2014 F150 5.0L Cold Air Intake really shines in the higher RPM range where airflow demands are higher and also makes a noticeable improvement in response in the lower RPM range. Keep in mind that our tests were performed with a completely stock exhaust system, and pairing this intake with a free-flowing exhaust and/or long tube headers will most likely net even bigger gains. Our tests were also performed in a very hot dyno cell, so conditions for drawing in “cool air” were not really ideal. So, actual on-road performance may be even better than our on dyno results. All in all, the JLT F150 CAI is a great intake that’s super easy to install and pairs great with one of our MPT Custom Tunes. The JLT Performance Cold Air Intake for 2011-2014 F150 5.0L is definitely MPT APPROVED!
For more product information, dyno graphs and to purchase this intake visit: JLT CAI for F150 5.0 2011-2014 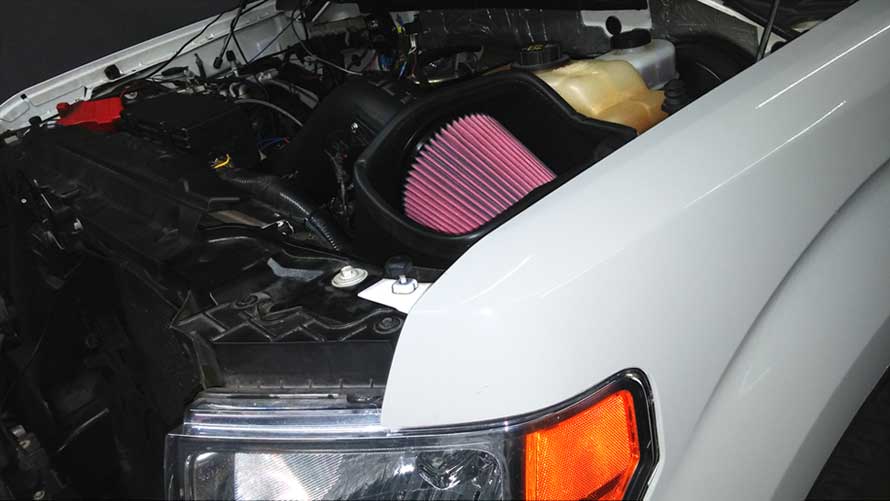 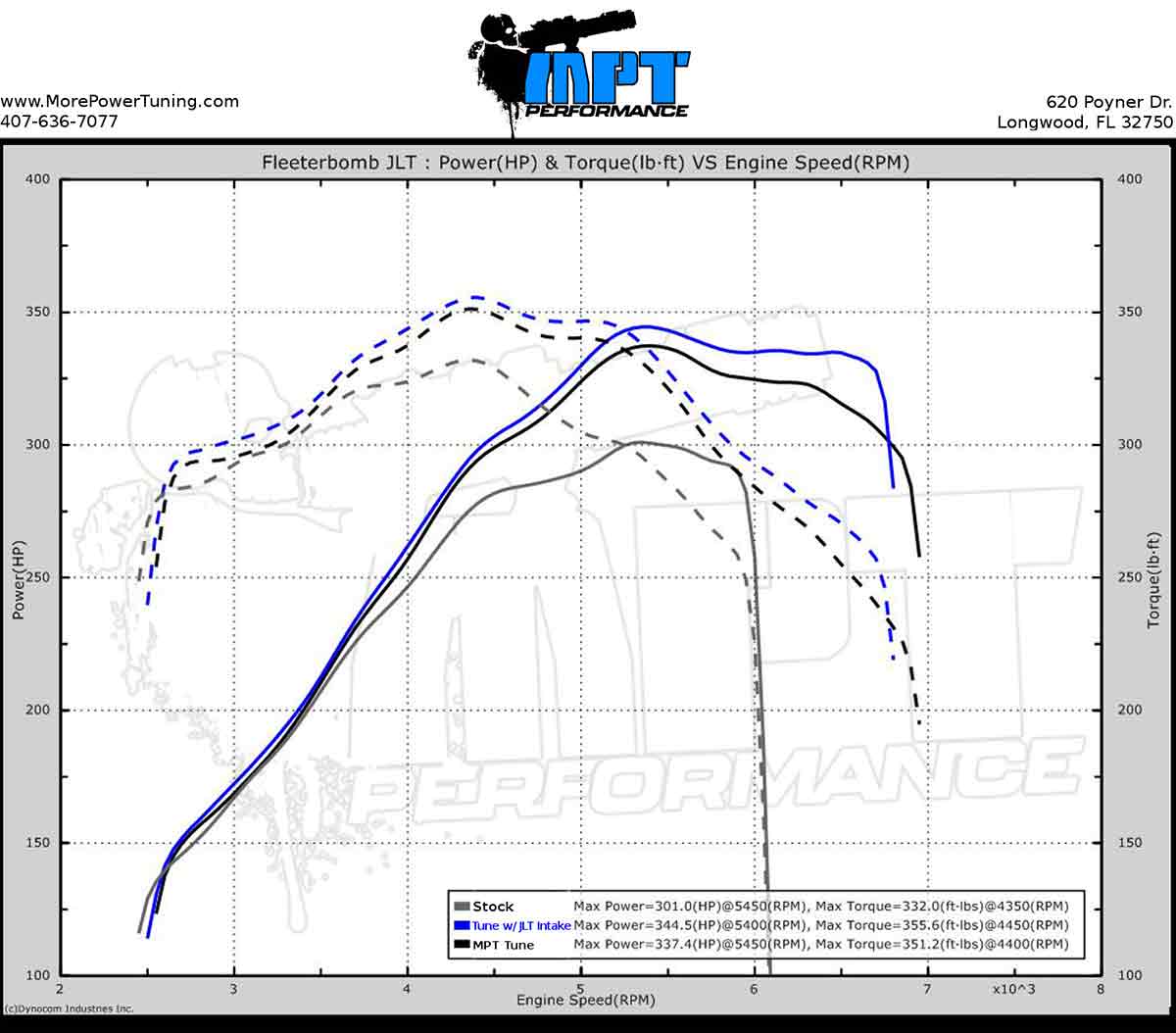